ISTANBUL COMES TO BLOOM WITH TULIPS 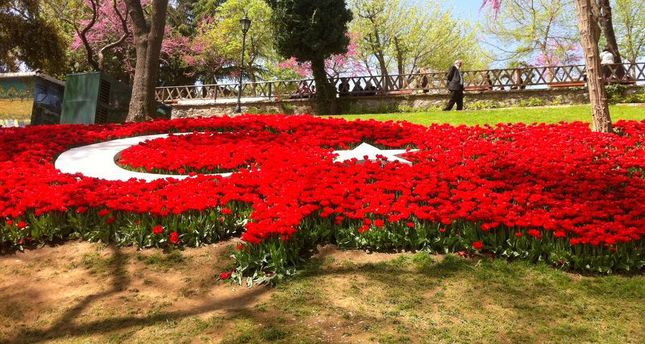 Turkish people are known to love flowers. Flowers not only decorate our gardens, but also are placed in homes or on window ledges. Our mothers and grandmothers look after them as if they are their children. Middle-aged men are said to grow flowers as a leisure activity. Women also prefer to wear floral-print dresses. In his portrait, Istanbul's conquerer Fatih Sultan Mehmed features a flower in his hand. Flower names are popular among girls. In olden times, men used to put adorn their hats with a flower, and the graves of women were embellished with them. In other words, flowers not only smarten our environment, but also soften our hearts. The Ottoman period is described as the Civilization of Flowers. - The symbol of Turkey

In particular, there are two flowers attributed with spiritual meanings: the rose and the tulip. While the rose is the symbol of Prophet Muhammad, the tulip represents the Creator, God. According to religious accounts, the rose is made of Prophet Muhammad's divine light. It is believed that the scent of the rose is his scent. On the other hand, the tulip resembles the written name of God in the Arabic language - Allah. Interestingly enough, both words are written with the same letters in the Ottoman language. Similar to a mosque, a tulip's blossom looks like a dome, and its leaves are reminiscent of minarets. Tulips are associated with God's tawhid (doctrine of Oneness) because a tulip seed blossoms with only one branch. The Oriental world is full of symbols. There is an inner meaning behind every word, look or move. It may well be suggested that the feelings of Oriental people are strong. They think with their hearts and like to voice their problems indirectly. Their relations are enhanced with dynamic love and literature. Art and the human are integrated with each other. A vizier was a poet and a soldier made paintings. There is no other place that gives particular importance to proverbs and figures of speech like the Orient. The tulip is also referred to in the Persian tragic romance "Khosrow and Shirin." Khosrow learns of his lover Shirin's death and commits suicide. When his blood drops on the floor, it turns into a flower. A tulip's red blossoms represent the burning love of Khosrow, and the black part at the bottom indicates that love turned him into ashes. Similar to France's lily, England's milk thistle and Lebanon's cedars, tulips are the symbol of the Ottomans. Decorative tulip images have been used on fabrics, carpets, ceramics, palaces, mosques and fountains. The robes and shoes of Ottoman emperors were embellished with tulip print. As mentioned above, there was a period in the Ottoman Empire named the "Tulip Era" by famous poet Yahya Kemal Beyatlı. - The tulip bulb costs 1,000 gold coins

The Tulip trend started in the 15th century under the rule of Ottoman Emperor Süleyman the Magnificent. At that time, the tulip was used to breed another flower by means of artificial selection and hybridization. The blossom of this new, delicate flower resembled the almond with its dagger-like leaves and sword-like edges. There was a vast variety of tulips. They were given flamboyant names such as "Şuâ-ı Yakut" (the light of ruby), "Nûr-i Sefîd" (white light), "Rûy-i Mahbûb" (lover's face), "Subh-i Bahar" (spring morning) and "Nâvek-i Gülşen" (the arrow of the rose garden). People organized tulip competitions. In one of the competitions, the "Nûr-i Adn" (the heaven of Adn's light) tulip grown by Sheikh al-Islam Ebussuud Efendi won. Tulip gardens, "Lalezar," became popular. Poems depicting tulips were collected in "Lâlenâme." In addition to this, an academy was established to study tulips. An Iranian tulip bulb, "Duhterî" (daughter), cost 1,000 gold coins. As time went on, tulip prices increased so much that Ottoman Emperor Ahmed III had to issue a price limitation. In 1725, the most expensive of the 306 types of tulips was the "Rummânî" (the spear of pomegranate). - The tulip travels to Europe

The first tulip bulb sent to Europe was sent from Istanbul to Vienna by German diplomat Ogier Ghiselin de Busbecq in 1562. Europeans loved these flowers and named them "tulip," which derives its origin from the word "turban" (head covering) in Farsi. Tulips travelled to the Netherlands and were sold at a price equal to a house in Amsterdam. The social status of people used to be determined in accordance with the type of tulips in their garden. When the market for tulips collapsed, wealthy people became poor in just one day. The period between 1634 and 1637 is called Tulipmania. "The Black Tulip," written by Alexandre Dumas, describes this period. The tulip market in the Netherlands currently earns as much revenue as Turkey's foreign trade. After World War II, British Queen Elizabeth II sent a bunch of tulips to Canada as a symbol of gratitude. Tulips not only decorated the streets and gardens of Canada, but also became centers of attraction due to tulip festivals. Recently, the Istanbul Metropolitan Municipality took action to organize tulip events, including festivals and conferences in different districts of Istanbul