Q&A: Everything you need to know about hajj, Islam's holy pilgrimage

"The first purpose of the hajj is to fulfill Allah's will," Islamic law professor Ekrem Buğra Ekinci told the Daily Sabah.
9.08.2019

Over 2 million Muslims from around the world began the five-day hajj pilgrimage on Friday. The faithful will circumambulate Islam's most sacred shrine, the cube-shaped Kaaba in Mecca, and take part in a series of rituals aiming to realize stronger bonds and unity among Muslims.

The purpose of the Hajj

"The first purpose of the hajj is to fulfill Allah's will," Islamic law professor Ekrem Buğra Ekinci told the Daily Sabah.

"It symbolizes the gathering that will happen on the day of judgment," he added.

"In its essence, according to Islamic teachings, hajj cleanses the pilgrim of their sins. It also helps Muslims unite, gather, and get to know each other," Ekinci said.

"One of the essential functions of the hajj is that religious practices, texts and rules are truthfully and unchangeably passed from previous generations to the next ones. As promised by Allah and thanks to the collective nature of Hajj, the Holy Qur'an has never been altered in the history," he added.

History of the Kaaba the Hajj ritual 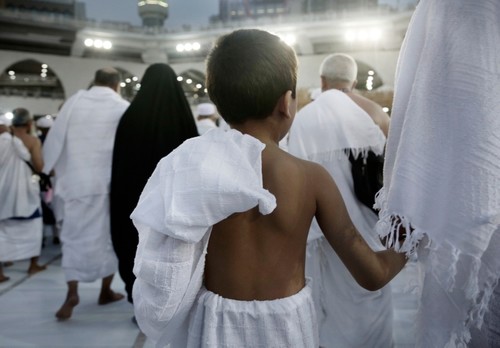 "The Kaaba is the first building and shrine ever to be constructed on the Earth. It was ascended to the high heaven during The Flood. Prophet Abraham built it again with his son Ishmael. They used to go up the Abu Qubays mountain and call on people to perform pilgrimage," Ekinci added.

"When the people heard the invitation, they responded by saying 'Labbayk,' meaning that they accept that invitation."

"The Hajj, like the sacrificing of animals, has existed since Prophet Abraham. On the other hand, Prophet Muhammad, peace and blessings be upon him, also told Muslims to perform Hajj just like the way he did," the professor stated.

"Prophet Muhammad (PBUH) performed pilgrimage only once, and that is known as the Farewell Hajj, as it was performed just before he was deceased. He passed onto us the rules of pilgrimage, and so did his companions," Ekinci said.

The Kaaba's importance for Muslims 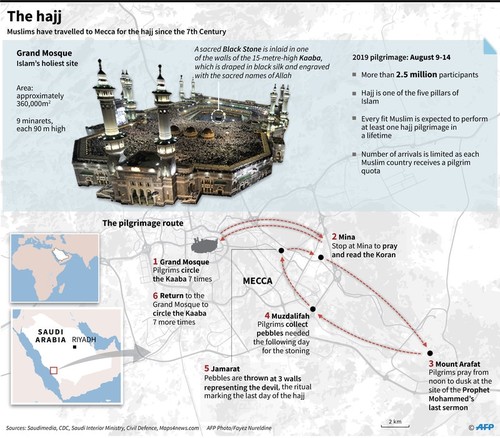 "Among the houses of Allah, all but one of those being mosques, Kaaba is the superior one. According to historical sources, even though it is not explicitly stated in the Qur'an, the Kaaba was first built by Prophet Adam, the first prophet and first human being to ever exist. The Kaaba has been destroyed and rebuilt countless times in history," Ekinci said.

Touching upon the - originally white - Black Stone, believed to have been descended from the heaven, Ekinci said that the stone, which is on the Kaaba, blackened over centuries due to contact with millions of people. "The Tawaf (circumambulation of the Kaaba) starts with the Black Stone. Pilgrims start the tawaf by greeting the stone with respect. The Black Stone is so revered that there was a quarrel among the people back in the day over who would put it in place on the wall of Kaaba. Prophet Muhammad (PBUH), a much respected, trusted and beloved figure even before his prophecy, became the negotiator between the sides, and solved the issue by making the sides carry the stone to the wall in cooperation and putting the stone in place with his own hands," he added.

"Prophet Muhammad (PBUH) also did tawaf before his prophecy. He removed the worshipped idols, erased the paintings and reverted the Kaaba to its original state as a holy shrine, symbolizing its monotheistic essence," Ekinci said.

Adding that the Kaaba symbolizes the existence and unity of Muslims worldwide, Ekinci also said that the Kaaba in its current form has been constructed during the rule of Ottoman Sultan Murad the Fourth, but the material used by the Empire to build the shrine is from the era of Abraham.

Rituals during the Hajj

First and foremost, Hajj is performed during a certain time of the year, those being the Shawwal, Dhu al-Qi'dah and Dhu al-Hijjah months.

"A pilgrim needs to be wearing the ihram. During the eve of Eid Al-Adha, it is a must to be on the Mount Arafat. Another necessity is to perform tawaf during the first three days of Eid," Ekinci said.

"The requirements to qualify for pilgrimage are: to be able to afford the Hajj, to ensure the safety of travel, to be free and to be in a good health condition," the professor added.

"It is wajib (necessary) to sacrifice an animal during the pilgrimage, to stone the devil in Mina, and to perform the waqfa in Muzdalifah during the night between the eve and the first day of Eid al-Adha," Ekinci explained.

"There are also the mustahabb acts, or recommended acts to better perform the Hajj. For example, doing tawaf on arrival to Kaaba, before officially starting the hajj rituals," he concluded.

The first day of hajj

The hajj traditionally begins in Mecca, with the minor "umrah" pilgrimage which can be performed year-round. To perform the umrah, Muslims circumambulate the Kaaba counter-clockwise seven times while reciting supplications to Allah, then walk between the two hills traveled by Hagar. Mecca's Grand Mosque, the world's largest, encompasses the Kaaba and the two hills.

Before heading to Mecca, many pilgrims also visit the Saudi city of Medina, where the Prophet Muhammad (PBUH) is buried and where he built the first mosque.

The second day of hajj

After spending the night in the massive valley of Mina, the pilgrims head to Mount Arafat, some 20 kilometers (12 miles) east of Mecca, for the pinnacle of the pilgrimage.

Thousands will also scale a hill called Jabal al-Rahma, or Mountain of Mercy. It is here where the Prophet Muhammad (PBUH) delivered his final sermon, calling for equality among mankind and for Muslim unity. He reminded his followers of women's rights and that every Muslim life and property is sacred.

Around sunset, pilgrims head to an area called Muzdalifah, 9 kilometers (5.5 miles) west of Arafat. Many walk, while others use buses. They spend the night there and pick up pebbles along the way that will be used in a symbolic stoning of the devil back in Mina, where Muslims believe the devil tried to talk Abraham out of submitting to Allah's will.

The last three days of the hajj are marked by three events: a final circumambulation of the Kaaba, stoning the devil in Mina and removing the ihram. Men often shave their heads and women clip a lock of hair at the end in a sign of renewal.

The final days of hajj coincide with Eid al-Adha, or the festival of sacrifice, celebrated by Muslims around the world to commemorate Ibrahim's test of faith. During the three-day Eid, Muslims sacrifice livestock and distribute the meat to the poor.